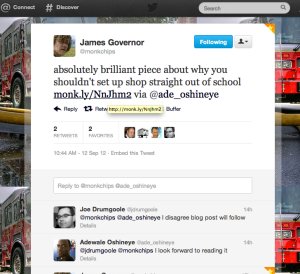 I read the article and thought it was just about the worst advice you could ever give a person who wanted to start their own business. In essence it says “wait” and “learn from others”. Well apart from the fact that success in startup land is in no way correlated with age (so waiting to get better is a bust)  the difference between running a business and working in a business is the difference between sex and pornography. Sex is hot, exciting, frantic and full of energy, pornography is well, kind of sleazy.

The best day to  start your startup is today, not tomorrow.

You will learn more as a startup founder in 6 months that you will learn in ten years as an employee. Why because as a employee you are riding with stabilisers and as we all know you have to take those mothers off to really grasp how to balance on a bike. As a founder you have to do everything, which forces you to learn prioritisation, you have to do shit you never learned in college and you have to learn that stuff fast. Finally you have to do the hardest thing you can do in business which is make life changing decisions with horribly imperfect data.

I worked for a a bunch of software companies big and small after college, always as an employee. Its inherent in the level you work at that I was never involved in decision making at any level that was make or break for my employer.  Basically you end up coasting in the functional discipline you learned at college (mine was computer science).

The other thing people forget about is that the salary sacrifice required for starting a company later down the line is a huge cost. If you are straight out of college you have been living on fuck all for four years. So some additional hardship to get your business up and running is no big deal.

So get out there, start, fail and start again. As Winston Churchill said:

Director of Developer Relations - Content View all posts by Joe

6 thoughts on “When to Start your Startup?”

This site uses Akismet to reduce spam. Learn how your comment data is processed.